You are here: Home / Charity Single

Click Here to get your copy of the recording

The ultimate vision of the project is to see a New Generation of consumers become aware of serious humanitarian issues and begin a journey of exchange and partnering with Christian Aid and others to increase the base of activist conscious and empowered to act on issues they can influence.

We have the power to Change the World and, with the help and grace of God, that power is already in our hands. Christian Aid in Partnership with Renewal Choir, Abandon Music Recordings and others stepped out to awaken consciences and spur into action the people of the UK and beyond by producing and then promoting the single “Change The World”

The concept of the project was to grab the attention of  a “busy” nation anesthetise by the many distractions of contemporary living  directing their attention to the actions they can take to “Change their World to Change the World”.  The song title  “Change The World” is both the hook and message of the single and the committed focus of the partnership activity required to release the recording

Once Renewal committed to record the song the choir set about recording in a room space which doubled up as a studio at the Inns Court Centre in Knowle West South Bristol. 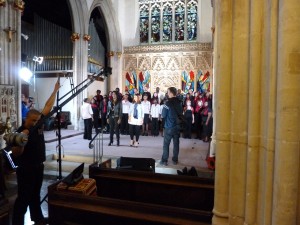 n a brisk October day the video shoot for the charity single “Change the World” brings a whole new level of experience as the choir is filmed on location at St Stephen’s Church in central Bristol.

The day was filled with lots of passion, laughs and hard work as the video crew and producer Darren Poole captured some real authentic “Renewal Juice” on film – what a fantastic experience as as Geraldine and Lou lead out the song verses with the full weight of the choir behind them!

Pentecost Festival event London is platform to launch the Change the World song. One of the world’s best vocalists, Jocelyn

Brown, joined Christian Aid supporters with a special guest performance to reflect, sing and celebrate at Change The World event, a special Pentecost thanksgiving event held at the Methodist Central Hall in central London on 26th May 2012.  Renewal were honoured to be asked to sing the charity single in support of the important work of Christian Aid which bares the name of the event “Change The World”

Christian Aid’s Head of Church Relations Dionne Gravesande says: ‘We are very excited to welcome the performers, speakers, and supporters to this exciting event where we will stand with the Church at Pentecost, and share our work to prepare people for the fight against inequality’

Michah Challenge International Director Joel Edwards adds: ‘History has never known such an avalanche of human desire for a better world. The prevailing ugliness only urges us to want more change. Change the World concert is another expression of that desire. And the Jesus Agenda provides us with a unique tool kit for change.’….. more to follow soon.

The Single Released….. The Mission is Now Over to YOU!

After the launch event at the Pentecost Festival the single is released to the Public as a digital download to spread the word and engage minds.

Come on you’al … its time to “Change The World”

Click on the image to purchase your copy of the single and start doing your bit to help Change the World!

Special thanks goes to Maureen Robinson from Christian Aid West as the initial catalyst passion behind the mission of the project and partnership working to get the job done; Darren Poole and Roger Russel of Abandon Music Records as record producer, provider of the song track, and project champion, Head of Church Relations Dionne Gravesande who provided the corporate support of Christian Aid by raising the profile of the project across the Christian Aid organsiation nationally; The skill and dedication of Renewal’s Choir director who whipped the choir into shape to powerfully convey the message of the song; For Geraldine and Lou who’s compelling vocals helped the song to really come alive; members of the Renewal Choir who gave up their time and effort to support a worthy cause –